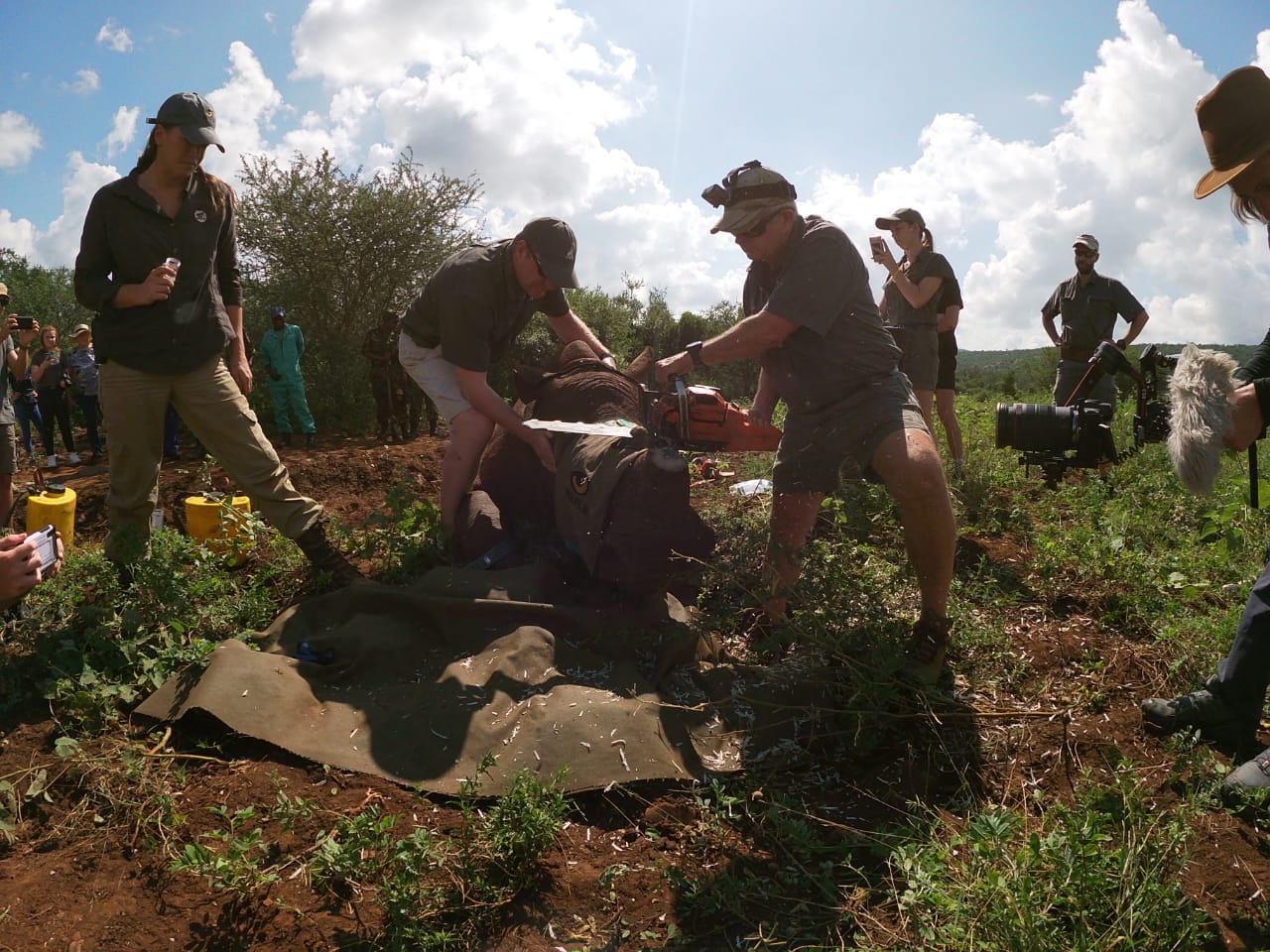 WILDLANDS, a programme of the WILDTRUST working collaboratively with The Aspinall Foundation and the Wildlife Emergency Fund (WEF) recently conducted an extraordinary collaring operation which aims to significantly increase the efficiency and impact of conservation efforts at Somkhanda Community Game Reserve.

The operation started off by locating each of the animals using VHF trackers that they were fitted with prior to being released into Somkhanda and then darted from the air by experienced wildlife vet Dr Mike Toft. Mpilo and Makhosi – two white rhino orphans who were released back into the wild in November 2020 after undergoing two years of rehabilitation, were the first to be fitted with the state-of-the-art technology. The pair were also dehorned during the operation for their safety as there had been a significant amount of horn regrowth. White rhino are on the IUCN Red List of Threatened Species and all the rhino at Somkhanda are dehorned as a strategy to deter poachers.

The second part of the operation involved fitting a new collar onto one of the last remaining big tuskers on the African continent. The 20-year-old big tusker that was translocated to Somkhanda Game Reserve, owned and managed by the Emvokweni Community Trust from Tembe Elephant Park, owned by the Tembe Traditional Authority, as part of a conservation strategy to strengthen the gene poole of the current herd at Somkhanda and to contribute towards the conservation of these giants.

Wildlife management and protection at Somkhanda plays an integral part in the conservation efforts that are carried out on the reserve and is the highest priority for WILDLANDS as the organisation who is responsible for managing and protecting the biodiversity on the reserve. One of the fundamental components for successful wildlife management is to have a good understanding of species behaviour and habitat. Satellite tracking provides important insights and information when monitoring animal movements and the collars which communicate with mobile devices via satellite allow wildlife rangers on the ground to track the movement of the animals with much greater speed and accuracy.

WILDTRUST CEO, Roelie Kloppers comments, “the new satellite collars will provide data that feed directly into the newly implemented earthranger tracking system on the reserve, allowing management to collect real-time date on the recently rewilded rhino and elephant. Our aim is to expand this level of real-time tracking across all priority species on reserve. We are extremely grateful for the continued support from Aspinall and WEF making this possible for the community-owned reserve.

The collaring was facilitated and funded by the Aspinall Foundation who are an internationally renowned animal conservation charity that is dedicated to protecting endangered animals around the globe and the Wildlife Emergency Fund, an organisation that specialises in the rescue of animals in imminent risk of danger. “We are thrilled to be supporting Somkhanda Game Reserve as it is a shining light in community conservation, with WILDLANDS as their strategic partner. We believe that the collars will go a long way in protecting these incredible animals,” Jean Nagiah, Director of the Wildlife Emergency Fund.

The use of this satellite collaring technology is an effective approach to provide innovative solutions for maintaining and protecting wildlife populations and their environment within protected areas. This innovation will help monitors and rangers better understand the range and movements of the animals at Somkhanda.