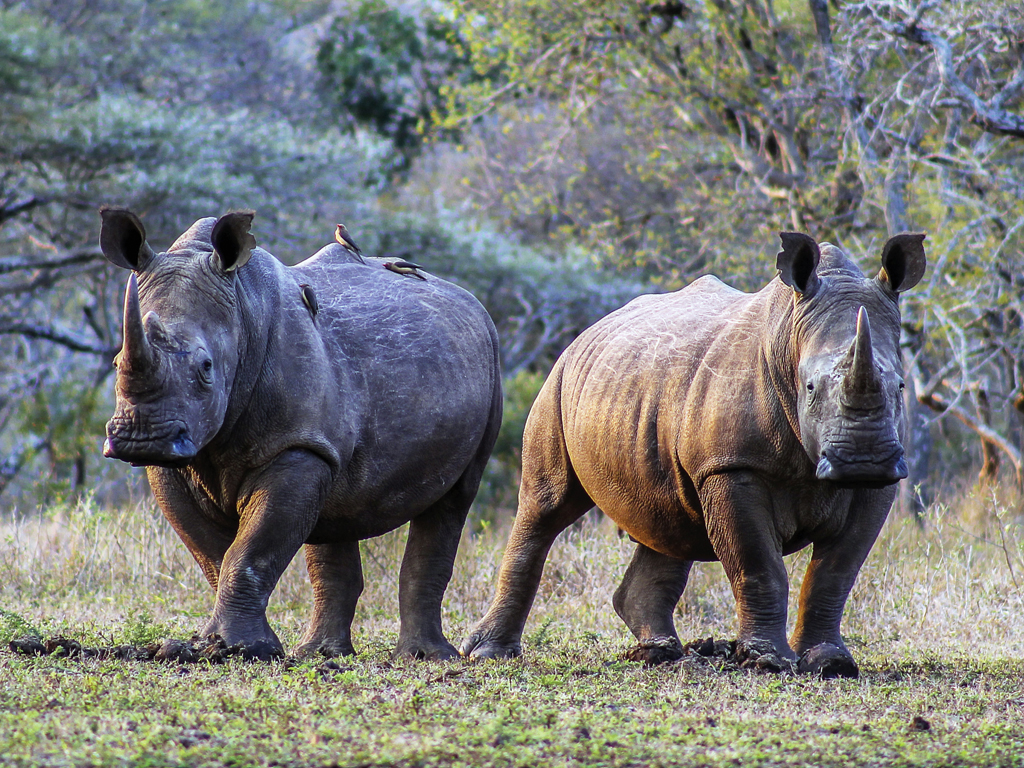 World Rhino Day is celebrated annually on the 22nd of September as a way for cause related organisations to highlight the plight and celebrate the gains made by specific Non-Profit Organisations in the protection and conservation of this iconic species.

WILDLANDS, a programme of the WILDTRUST celebrates this auspicious day and has much to account in terms of the successes of the work achieved over the years. Somkhanda Community Game Reserve, owned by Emvokweni Community Trust (Gumbi community in Northern KwaZulu-Natal) is a unique success story of a community owned reserve with black and white rhino populations.

In 2019, Somkhanda became the first Community owned reserve to contribute to the WWF Black Rhino Range Expansion Project (BRREP) which saw 17 black rhino from South Africa being successfully translocated to Liwonde National Park in Malawi. In this historic move, two of the Somkhanda born female black rhinos were contributing to the black rhino populations in Malawi. This was a huge achievement for the Gumbi community and the Emvokweni Community Trust as this realized their vision of devoting their land for conservation. Nathi Gumbi comments, “When the trust decided to dedicate Somkhanda to conservation, we never imagined that we would be contributing towards the expansion of the critically endangered black rhino. We are proud pioneers, and we believe that this will add to our already rich history and heritage.”

In 2020, again Somkhanda made a historical move that saw two orphaned rhinos, Makhosi and Mpilo being re-wilded from a rhino orphanage back to Somkhanda. This was a truly heart-warming, full-circle, story as Mpilo’s mother had been poached and killed for her horn at Somkhanda when Mpilo was just a few months old. Makhosi on the other hand was orphaned through the severe droughts in KwaZulu-Natal in 2016. Mpilo and Makhosi met and bonded at the rhino orphanage and when they came of age, WILDLANDS, together with the Zululand Conservation Trust, Aspinall Foundation, Conservation Solutions, Wildlife ACT and Ezemvelo KZN Wildlife collaborated on successfully translocation these two white rhinos back to their natural habitat, giving them an opportunity at a ‘WILD’ life.

Since Makhosi and Mpilo’s release, a film has been created about their re-wilding called COMING HOME. This film was released at the International Wildlife Film Festival (IWFF), held virtually due to Covid-19 in May 2021 where it was viewed in over 18 countries and winning the Audience Award (as the most watched film at the festival) While the film hasn’t been released for public consumption, it has been selected for a number of prestigious conservation film festivals such as the Flickers Rhode Island Film Festival (USA), Golden Movie Awards (USA), Conservation Film Festival (New York) and the Wildlife Conservation Film Festival (New York) Through this film, a California based production company, Andrew Malcolm Films, aims to show the challenges and the success stories of like-minded organisations who are on the frontlines, fighting to conserve and protect Africa’s natural heritage and endangered wildlife species. Soon Mpilo and Makhosi will be celebrating one year back in the WILD.

“Saving rhino from extinction is a rallying call to our partners, donors and the communities where we work. We are extremely fortunate to work on the frontlines of rhino conservation and to be able to contribute directly to range expansion and species survival across various reserves and community areas. Our success on this front gives us the belief that we can address wider environmental collapse and the destruction of our rich biodiversity. There is still so much to do, but we draw strength from every ranger working tirelessly in the field, every facilitator raising awareness in their communities and every donor, partner and supporter who contribute to our work. We are incredibly grateful and will not allow greed, wantless destruction and rampant corruption overcome the hard work of many dedicated people working to conserve our rhino and the beautiful places they inhabit.” WILDTRUST CEO, Dr Roelie Kloppers.

We call upon all our supporters to celebrate these successes and continue to help us contribute towards rhino conservation for a ‘thriving and resilient world.’ Support our rangers who are on the frontlines of protecting our wildlife by making a donation to the Wildlife Ranger Challenge https://www.justgiving.com/fundraising/somkhanda-game-reserve-wildlands-2021 This link closes on the 30th September.

Dr Ian Player said, “”We will lose something deep within ourselves if we allow wilderness to be destroyed.”