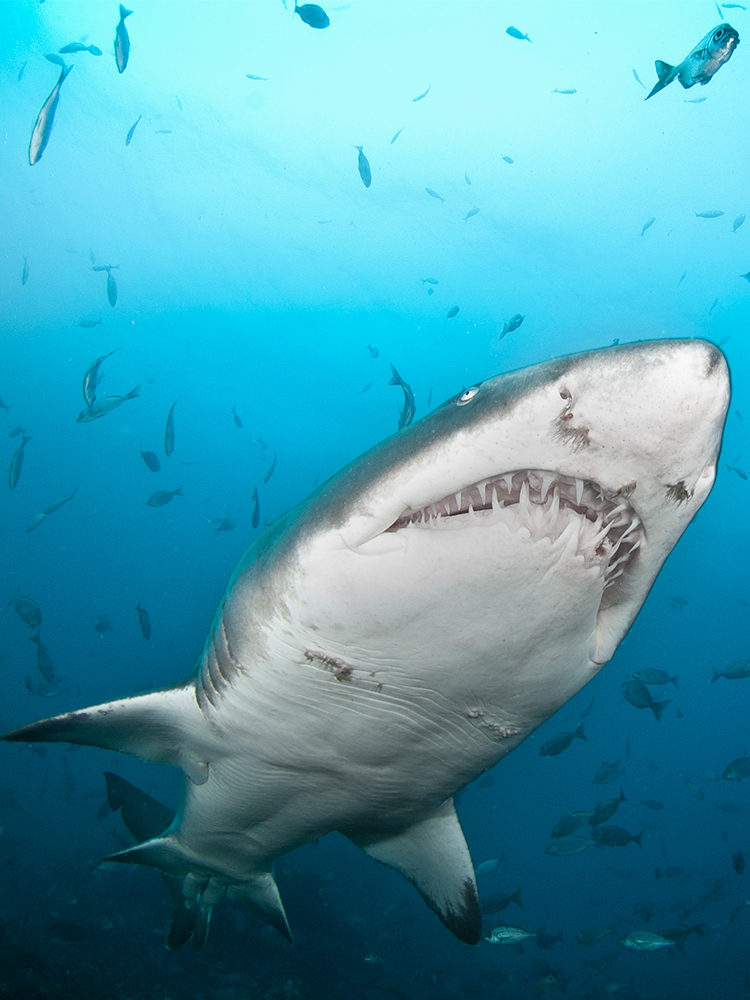 A launch in Cape Town earlier this month introduced ‘Shark Attack’ to South Africa, a 3-year shark & ray protection effort led by WILDOCEANS (a programme of the WILDTRUST) and made possible by the Shark Conservation Fund, with the goal to improve the status of threatened sharks and rays in South Africa. The Project focuses on knowledge improvement, increased legal protections, support and training for effective implementation of conservation measures, as well as advocacy and awareness to spur citizen action and support decision-makers.

Without immediate action, many of the large sharks in the world will face global extinction in the coming decade. South Africa is a top 3 global hotspot for shark and ray diversity, harbouring 204 species and one-third of the global fauna. 69 of these species are endemic to South Africa, meaning they are unique to our waters – and something we should celebrate and be proud of.

Karen Sack, CEO and President of Ocean Unite, an international NGO at the forefront of driving action to address the climate and biodiversity crises by highly protecting at least 30 percent of the ocean by 2030 and building ocean resilience. She brings 25 years’ experience of working for international non-governmental organizations on environmental issues as head of Greenpeace International’s oceans campaign and senior director of international oceans at The Pew Charitable Trusts before founding Ocean Unite with Sir Richard Branson, founder of the Virgin Group and José María Figueres, former President of Costa Rica and Co-Chair of the Global Ocean Commission.

“Forget Jaws, it’s the sharks that are under attack. We kill over 100 million sharks every year as bycatch or for their meat and fins. As top ocean predators – not to mention lucrative tourist attractions – sharks are worth far more alive than dead; it should not take their extinction for us to figure that out. Sharks and rays need local sanctuaries, regional management, international protection, and changing cultural perceptions of products like shark fin soup and ray gill plates if these magnificent animals are to survive.”

Markus Burgener is a Senior Programme Coordinator with TRAFFIC Southern Africa, a leading Wildlife Trade Monitoring Network.  He has been with TRAFFIC for more than 20 years and has worked on a wide range of wildlife trade projects covering policy development, capacity and knowledge building. Improved monitoring of the trade in shark and ray products can provide valuable information to government agencies managing related fisheries and in addressing illegal catch and trade. “I am looking forward to working with and supporting these agencies towards ensuring legal and sustainable trade in shark and ray products from South Africa.”

Sonja Fordham is founder and President of Shark Advocates International, a project of The Ocean Foundation and member of the Shark League coalition. She has been a leader in shark conservation for more than two decades.  Her work is focused on advancing science-based shark and ray policies through fisheries management and wildlife conservation bodies. “South Africa has a key role to play in securing urgently needed protections for one of the world’s most economically valuable and intrinsically vulnerable oceanic sharks: the shortfin mako,” said Fordham. “I am delighted with this opportunity to encourage South Africa’s leadership in upcoming international fisheries deliberations toward ensuring that scientists’ recommendations for a North Atlantic mako ban and a South Atlantic catch limit are agreed this year, before it’s too late.”

Mark Bond, Associate Professor of Research at Florida University, has dedicated his career to studying the distribution, abundance and behaviour of sharks and rays and whether they benefit from marine protected areas. His efforts have been instrumental in obtaining protections through international treaties and in 2016, he was part of an international effort to have four shark species and nine rays added to the CITES list of protected species. “In recent years we have seen an increasing amount of shark and ray species included on CITES to ensure trade in shark or ray products does not threaten their existence in the wild,” said Bond. “I am excited to help facilitate the use of these CITES listings to work in concert with fisheries regulations to ensure South Africa effectively manages it’s shark and ray populations, maintains its role as a biodiversity hotspot, and continues to be a leader in shark conservation.”

“Greater transparency, data-sharing and international collaboration are crucial for good stewardship of our global ocean – to fight illegal fishing, to protect fish stocks and livelihoods, and to increase the safety and well-being of fishers,” said Tony Long, CEO, Global Fishing Watch. “Publicly-available data and tracking of fishing vessels can advance ocean research, and act as a powerful deterrent to illicit activity, reducing the burden on enforcement efforts.”

Judy Beaumont, the Deputy-Director General Oceans and Coasts (South Africa, Department of Environment, Forestry and Fisheries) said: “In South African waters we really are a lifeboat for sharks and rays, globally. This project addresses a conservation, fisheries and economic imperatives. We are supportive of this collaborative initiate and believe this is an important conversation to be had.”
The ‘Shark Attack’ campaign hopes to inform the public and ocean users about the imperiled status of sharks and rays, recovery actions required and highlight the benefits of non-consumptive and sustainable use.

“The campaign has a big job to do in also trying to shift the negative perceptions that exist around sharks, exacerbated by media and films like jaws or ‘The Meg’,” said Campaign Lead Lauren van Nijkerk of WILDOCEANS. “We don’t hear or see about sharks in a way that makes us want to learn more about them, understand them better or figure out ways to live in harmony with them – it is their ocean after all. Unfortunately, we only ever hear about sharks when there is a film about them or a dramatic shark attack – we don’t ever hear about them in a way that sets them up as the victim, or shows how the ‘hunter’ is now the hunted.”

Speaking at the launch event was Achmat “sharkboy” Hassiem who lost his leg to a great white shark at Muizenberg beach in Cape Town in 2006. Achmat went on to compete in swimming at the Paralympics and medalled.  Despite his ordeal he uses every opportunity he gets to advocate for sharks and tell the world why they need to be protected. “I protect the shark that bit me. Her name is ‘Scarlett” because she had a scar across her head. I do not fear this creature – I would actually like to thank her for what she did for my dreams.”

“This project would not be possible without the collaboration, action and input of our partners,” said Dr Jean Harris, WILDOCEANS’ Executive. “The IUCN Shark Specialist Group, TRAFFIC, South African National Parks, SAIAB (South African Institute for Aquatic Biodiversity), National Research Foundation, Stellenbosch University, Florida International University, Ocean Unite and the South African Department of Environment, Forestry and Fisheries. We want to extend our appreciation, thanks and excitement around working with you all and being able to see the increased protection of sharks and rays, and ultimately the positive impact on the species.”