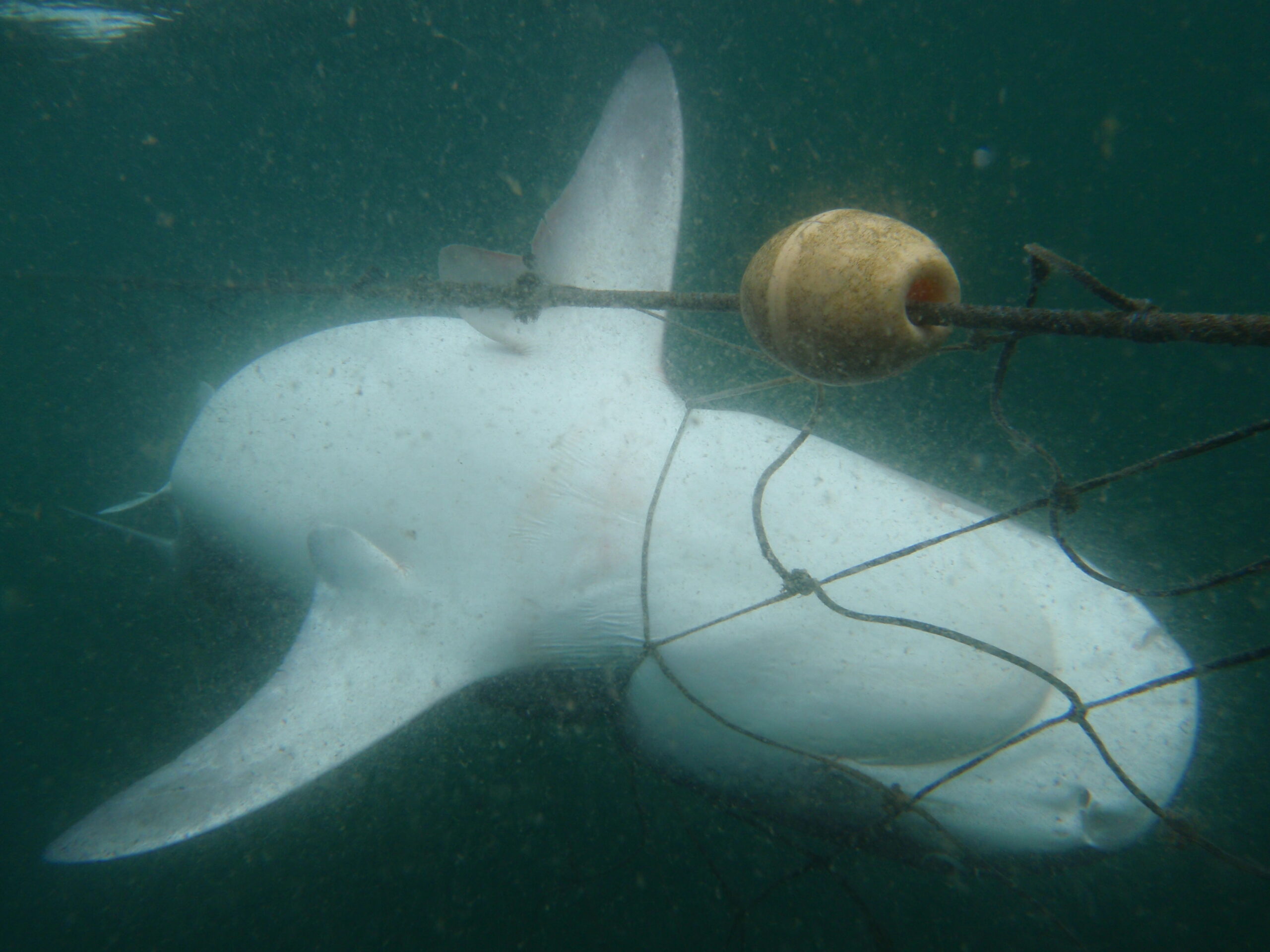 Did you know that the shark nets along the KwaZulu-Natal coast do not prevent sharks from reaching the surf zone on swimming beaches? Luckily, it is highly unlikely that you will ever be attacked by a shark. So unlikely, in fact, that the odds of dying from a shark attack in South Africa are one in 878 956. For decades, the human fear of sharks has transcended logic and statistics. You are more likely to have a coconut fall on your head than be attacked by a shark!

Shark nets are not actually barriers but are staggered 300m and 500m parallel from the shore with gaps between and below them. Each net is usually 214m long and 6m deep, with a stretched mesh of 51cm, and is secured at each end by two anchors. Sharks can therefore swim under, around and between them to reach the surf zone. The nets are really a form of fishing gear, called gill nets, which work by trapping fish and sharks by their gills once they have pushed their heads through the net.  Unfortunately, sharks are not the only marine life that gets caught in this unselective gear. For example, in 2017, 18 turtles, 26 dolphins, 4 whales and 30 rays died in the nets.

There are currently 37 beaches along the KwaZulu-Natal coastline that have “shark safety” gear installed, owned, and maintained by the KwaZulu-Natal Sharks Board (KZNSB), with the nets supplemented by 177 drumlines. Drumlines are a more targeted form of fishing (targeting large sharks) and consist of an anchored float from which a single baited hook is suspended. The species composition of the catch differs with fishing gear type – some sharks and other species do not take bait whereas gill nets are indiscriminate and can catch anything over a specific body size or shape. The logic behind drumlines is to reduce the number of large sharks in the vicinity of bathing beaches by catching them, thus lowering the probability of encounters between large sharks and people.

Herein lies the conundrum – many of the shark species killed in the nets along our beaches are highly endangered (as endangered as pangolins or wild dogs). In fact, sharks and rays are arguably now one of the most endangered taxa on the planet. South Africa is one of three global hotspots for sharks and rays (with over 200 species in our waters) and could play a significant role in preventing further extinctions, and aiding the recovery of these imperilled species.

According to catch statistics (between 2013 and 2017) on KZNSB’s website, dusky sharks are the most caught shark annually, with 92 caught (15% released alive). Most sharks caught are harmless juveniles, less than 100cm in length. The second most frequently caught shark is the Critically Endangered scalloped hammerhead, with an average of 69 caught per year (1% released alive), almost all juveniles. This is problematic since, according to the IUCN (International Union for the Conservation of Nature), this species is one step away from becoming extinct. They are followed by spinner sharks, assessed as Near Threatened in 2005, with an average of 62 caught (12% released alive) per year. Every year, we  lose about 416 sharks and rays to the safety gear, of this 62% are listed as threatened. The fact that this gear is mainly catching juvenile sharks is also a major concern, i.e., removing the stock which has the potential to procreate, especially since sharks generally mature late in life and have few offspring. When we consider that globally we are losing around 100 million sharks per year and that some are even more endangered than our beloved rhino, can we afford to keep another threat to their survival in the form of bather safety gear?

The KZNSB has taken strides over the years to reduce the environmental impact of their bather safety gear. Since the 1990s they have reduced the number of beaches “protected”, and the total number/length of nets along the coast. They are also slowly replacing nets with drumlines, which has reduced both shark mortalities and deaths of other marine animals. Although drumlines target a different group of sharks, they do not entirely solve the problem. For example, they catch an increased number of Endangered juvenile dusky sharks.

For many years, KZNSB and others have been trying to develop methods for bather safety which do not kill or harm sharks, such as a shark repellent electric cable. The KZNSB has also experimented with acoustic deterrents to reduce the number of dolphin and whale entanglements in the nets, but these have not proved very effective. The Shark Spotters programme in the Western Cape is a proudly South African example of a non-lethal solution that keeps both bathers and sharks safe. The recently launched SharkSafe Barrier system, a configuration of pipes with strong magnetic fields, has also proven to be a strong deterrent for shark species. Unfortunately, due to KZN’s open and high energy coastline, these alternatives are not currently viable here, but this certainly does not mean that additional options should not continue to be explored.

Furthermore, to reduce shark and dolphin catches associated with the sardine run and the entanglement of humpback whales during their annual migration from the Southern Ocean, the nets are removed from most beaches between May and July every year. To do this, KZNSB tracks the sardines and the whale migration by undertaking observation flights and remove net installations as the sardines and whales enter KZN. This has proven to be extremely effective in reducing deaths of endangered species and should pave the way for a new permanent protocol of removing the nets along the entire KZN coast for the full duration of the sardine run and whale migration (June to November).

The success of this strategic removal of nets could also be used to protect threatened sharks near areas where they gather in large numbers to breed or where specific habitats are important for their survival and recovery. For example, the Protea Banks Marine Protected Area (MPA) recently proclaimed on the KZN South Coast, is well-known for its diving and diverse shark sightings. Thousands of Critically Endangered scalloped hammerhead sharks aggregate every year between November and January, and other threatened shark and ray species such as sand sharks and ragged-toothed sharks frequent the area. One of the recognised objectives of this MPA is to provide protection for these species, and in turn, this has yielded an internationally renowned vibrant “dive with sharks” tourism attraction.  Ironically, the popular bathing beaches just inshore of the Protea Banks MPA have both nets and drumlines, aimed at catching and killing many of the same species of sharks and rays. There seems to be a strong case for KZNSB to remove gear from the proximity of this shark sanctuary permanently or, at the very least, seasonally.

Between 1984 and 2014, KZNSB staff tagged and released over 4250 sharks, and dead sharks were examined and measured for research. As a result, South Africa has one of the most comprehensive shark datasets in the world, contributing globally to better understanding sharks. The nets have also allowed assessment of their status over the years and provided useful data to inform conservation efforts.

South Africa, we can do better. It is time to shift the mindset of our beach-goers, tourists, and officials, have discussions over viable bather safety gear alternatives, and most importantly, we require political will. What is needed is a new long-term strategy for the KZNSB, investment and dedication into the implementation of non-lethal alternatives for KZN, the potential redeployment of staff and boats to fisheries enforcement instead of implementation of a harmful fishery, responsible tourism, and focused education on the environmental and tourism benefits of our sharks.

There is strong scientific evidence proving how important our sharks are in balancing our ocean ecosystem. Surely, we as humans entering the ocean should be modifying our behaviour to sensibly avoid contact with them and to protect them rather than trying to eradicate them. And, given that the shark safety gear essentially provides a false sense of security to bathers – are they worth the risk to the existence of iconic keystone species in our ocean?